skip to main | skip to sidebar

End of the Season

I can't believe headlamp racing is already over for another year ... so sad.  Many many thanks to Sharon Chen, whose awesome reports all winter have allowed me to vicariously enjoy headlamp skiing while I'm trapped at work.  Next year I will be there, but until then, enjoy Sharon's final report and pictures.  And have a great summer of training ... next winter will be here before you know it, and we'll be charging up our headlamps and heading to the trails for another mid-week blast of fresh air.  I've missed all of you and can't wait to see you again! 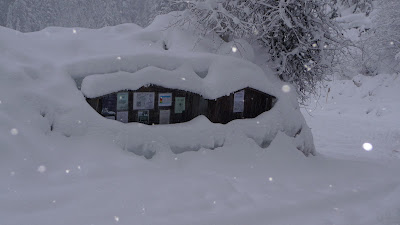 After a perfectly timed departure from our carpool spot, and deftly missing avy-control work on an eastbound I-90 Gold Creek exit closure, John, Dan, and I found the Cabin Creek parking lot blanketed in an 8" layer of snow -- perfect for snowshoeing, making snow angels, doing snow somersaults -- and also light, fluffy, and deep enough for a challenging skate…again.
Tonight is relay night and potluck night.  For the relay, I'll skate, and John S from SNC is my classic ski teammate -- thanks John!  Dan, John, and I drop off our food in the Cabin, and warm up in the PK loop.  Others are warming up as well, on the Berg and on the Road, making first tracks for us through the thick ungroomed snow, and are now beginning to gather by the map at the bottom of the sledding hill.  Jon F tactfully guides us as altered relay routes are suggested by our small crowd, then eventually and collectively we agree to ski the standard Berg course with PK loop.  We'll each start on our own, self-time for two freestyle loops, and add our team's times together, skiing almost in parallel with our teammate instead of alternating sequentially as in typical relay fashion.  We form teams, then take some pics of tonight's adventurous dual role headlamp relayers/trail groomers.
Highlights from the relay for me: playing with techniques for skiing in thick snow, encountering a blue but mostly white Na'vi-like form (not me this time), and realizing I now want to learn the classic technique (but only for uphills on a deep snow-covered trail).

As was my goal for the night, I checked with a couple of the Olympics-bound regulars on tricks for skiing in thick snow, and experimented with those techniques on my skating relay.  Although my time was about the same as last relay's slog, tonight's gliding overall required less effort and energy expenditure, though included 4 (fun) face plants and falls!  Double-poling in the tracks (Jon F technique) is the way to go if one has a strong upper body.  Eventually tiring and realizing my situation is the reverse, I experimented with 'floating' on top of the snow (John S technique), committing to each ski, single poling (Joy technique), and holding the glide as long as I can.  The floating part was quite fun when I could do it! : )
At one point during my double-poling-in-the-tracks experiment, deep in the dark woods of the Berg, a very long lean white form launched past me.  I knew someone from behind was approaching because of his light.  All I saw was what might have been a white Lycra body suit or long top, with a bit of blue on the back, skate powerfully by, then I believe he popped back in the tracks.  I think we might have nearly collided in the skate lane as I got out of the left-sided tracks, but the white form agilely whizzed by further to the right.  The speed, power, and super long glides of some of these Na'vi-like guys is utterly amazing, even in thick snow and uphill!  Awesome to watch, but often one has only a split second to see them flash by, then they disappear over the hill, around the curve, or into the horizon.  Carefully studying the pre-relay and post-relay Cabin pictures, I see no one in a white Lycra body suit; however, I've observed a high propensity for frequent outfit changes among this crowd.  By the physical shape of the skier, I suspect this was either Jon or Jason, (or a real Nordic Na'vi!), but somehow forgot to confirm back in the Cabin if either donned white for the relay.
For those who know me, the unimaginable has happened (though probably germinated and has been percolating since mid-January):  I want to learn the classic technique!  Mostly, I want to sprint up a hill covered in deep snow like I see the classic skiers do with no worries about traction or slippage.  Then I want to be back on my skate skis.

Post relay (or trudging for Dan and his snow-adhering-philic skis), we all gathered in the Cabin to feast on yummy pan-roasted chicken and pork sausages, a spread of Mexican, Greek, and Chinese dishes, and desserts, all fit for protein-starved or vegetarian-oriented hungry headlamp relayers, trail groomers, and snowshoers with sticky snow-clumping skis.
We ate, we won prizes, and we drew prizes for each other.  Many of us walked out with a black Helly Hansen performance base layer top with cool mini zebra-striped swooshes (I believe swooshes have been proven to greatly assist with speed) around the left arm and right shoulder -- thanks much Brent, and HH!   We met and talked with each other, took more pics, and made some new ski friends.
Overall, a very enjoyable and unique evening relaying, experimenting with thick snow techniques in skate skis, eating post relay, winning prizes, meeting new ski friends, and a memorable way to close out our headlamp season.  Our night's headlamp pics added to the season's headlamp set. 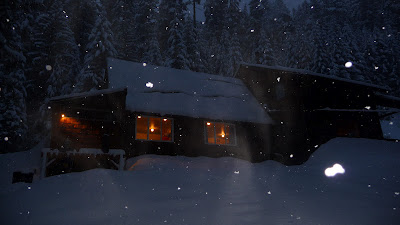 The Berg loop and the PK loop, twice for masters, once for juniors. The Berg loop starts at the big open stadium area and is the smaller trail on the right that parallels the road. The PK loop is the small wooded loop behind you. Go for it!

Nick the groomer is keeping us updated on conditions at Cabin Creek right here. Check back often!
http://www.kongsbergers.org/GroomingReport.html

We [Heart] Our Sponsors!

And thank you, Petzl!

Headlamp Race Basics - What You Need to Know

We take a special pride in this: no lights, no structure, no timers, just totally dark cross country ski racing at Cabin Creek, exit 63 on I-90, on Wednesday nights! Bring your own headlamp and your own watch; self-lit, self-timed and self-started, any time between 5:00 pm and 8:00 pm (except relay nights, which start at 6:30 pm). All races are 5k for masters, 2.5k for juniors, 2k for tiny juniors 10 and under. Relay nights are six 1.5k laps alternating classic and skating.
The cabin is open for changing clothes, eating dinner and telling stories after the races. Be sure to note your time on the sign-in sheet in the kitchen!

All are welcome -- it's a great way to get some fresh air and ski with your peeps in the middle of the week!

Did I spell your name wrong, or get your time wrong? Email me at xcskigirl04@yahoo.com.

Found: winter! Get out and play in it.